I was born in New York City in 1959. That makes me one of the last of the ‘baby boomers’ and youngest of ‘the 60’s generation.’ I grew up in exciting times. Like many other boomers, I was born with a passion for social change and little or no religious affiliation. Unlike most others, I was also born into wealth, which afforded me going to one of the best private schools in Manhattan and taking yearly trips abroad, staying in five-star hotels everywhere my family went.

From early on I knew I was privileged to live, travel and experience the world as I did. At the same time and along with millions of others, I also knew I was part of a generation who believed we could make a difference for good in the world. This hunger for change characterized both my years as a teenager and young adulthood and then, later in my life, as a spiritual seeker.

My father was an alcoholic, and his alcoholism, as well as that of my two brothers, weighed heavily on our family life. It took many years to figure out that my father was no more capable of safeguarding me than my mother or anyone else was capable of offering the love that I sought. Over time, this knowing has allowed me to forgive my parents for their shortcomings and to forgive myself for mine.

I learned from a very young age that suffering goes on everywhere. It can be found in every home, every family, and every circumstance known to humankind. My growing awareness of this type of universal suffering has been the cornerstone of my desire to break free from the cycle of birth and death in this lifetime.

It took getting diagnosed with an inoperable brain tumor a year and a half ago for me to realize that it was not worth it to hang on to my illusory judgments that had me bound in all of my relationships.

Neither of my parents had a real connection to religion or spirituality. My father had been born and raised Catholic but was put off by the hypocrisy he found. He remembered priests who were sexual predators and nuns whose regular practice was to smack knuckles with wooden rulers whenever a student broke rules, was forgetful or needed real or assumed correction. Like most people we knew, my father was proud of his lack of faith. He liked to say he was an atheist. And I suppose he was until he decided to become sober at age seventy. Now as an active member of AA, he readily admits to having a spiritual path based on the Twelve-Step program.

All I knew was that something was missing. There was a deep longing in me to find some kind of fulfillment. Back then I thought there must be someone somewhere who lived in a normal world that had to be better than what I knew.

In 1993, I did the Miracle of Love Intensive® and found a personal connection with God, a connection that I didn’t even know was possible. That nine-day event truly changed the direction of my life forever. It opened up a whole new world where God became real and the possibility of breaking free from the suffering was introduced to me for the first time. I felt new and whole. Most importantly, I had found my spiritual master.

The Intensive®: God’s Kiss on My Forehead

Kalindi led my first Intensive. Given my background, I am not easily floored by outrageous behavior and attire, but Kalindi wowed me. She was so wild and free. I was awed, inspired and completely carried away. All she had to do was come within twenty feet of me for me to feel surrounded by her presence. And when she spoke, her wisdom seemed infinite. 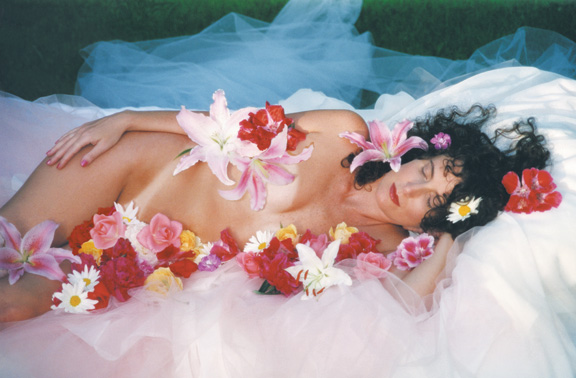 That Intensive was the most exciting and amazing event of my entire life. In it, my passion was reawakened, and my love for myself and for others was ignited. My thirst for spiritual truth became stronger than any other desire. This desire only grew stronger as I learned to use the tools that continue to propel me forward spiritually.

In that nine-day Intensive, I realized I could never do anything about the past or the future, but right now in this present I could know God and move closer to Him. This was my first taste of that connection and has since become my personal barometer for spiritual movement.

I knew Kalindi was powerful, but it wasn’t until the summer of 1994 that she personally touched me with the power of her presence. My first one-on-one experience of her illustrates Kalindi’s unique way of working with each disciple. It happened on a typical day in my life. I had no inkling that something extraordinary was about to occur.

I was headed into a business meeting in the house behind which Kalindi lived in a cottage. I arrived a little early and began conversing with others in the room. That was when she came in. Kalindi got out of her bath, wrapped herself in a towel and, dripping wet, walked out of the cottage, into the house and into that room. She came over to me and said something like, “You need to know you are being called by God. It’s time for you to jump. Right here! Right now!!” I had no idea what she was talking about. Her energy was focused on me and my mind was completely blown.

She insisted that if Jesus Christ had been standing in front of me, I’d be on my knees crawling after Him. I began to sob uncontrollably. Then she said, “This is what true feelings look like,” and she urged me to review the next month’s Intensive. After that she left the room, leaving just as suddenly as she had entered. It was both shocking and magnificent to be on the receiving end of such power and love coming out of that little body.

Kalindi said that each soul comes in contact with an Incarnation when that soul is ready to leave this plane of illusion. As always, when she spoke, her words burned into me. She praised all Incarnations that came before, saying that each blesses those with whom they come in contact. She taught that, just like Jesus, Buddha, Krishna and other Incarnations, Lord Gourasana came in response to the call of this age, bringing gifts necessary to this time, including the blessing of full awareness, or enlightenment, for those seeking it.

I never thought I would write a book about my spiritual transformation, nor did I think I would get diagnosed with a malignant brain tumor at the age of fifty-one. Then again, it is only because of the tumor that I now awaken daily to the depth of my connection to God. Just as daily what is unnecessary falls away.

Lately, even my sense of priorities has shifted. Only a while ago my ‘terminal’ story was about holding on to whatever I could of the physical, emotional and personal me. I wanted longevity and vitality. I wanted continued association with my peers. I wanted to continue being a mother. There was a sense of unfinished business that burned in me. Now, the affairs and concerns of life are nowhere near as intriguing or inviting.

This transition began several years before I knew I had cancer.

One of the sweetest moments in this time of change came when I heard Kalindi’s voice reminding me, “I am a fool. I am lost. I don’t know anything.” There was such relief in those words for me. Finally, I understood them in my bones. I don’t know anything. I control nothing. No matter how clearly I may have seen my life unfolding in a certain way, it is the unexpected that I find everywhere. I did not ask to die, and yet this dying process has become the most significant, eye-opening event of my life, my ‘Bodhi Tree,’[1] if you will.

Although I would not have known how to define the words ‘conscious departure’ six months ago, I now recognize that my whole life has been lived in order to get to this singular moment and to do it consciously, fully awake and aware.

First we must have an unyielding desire to leave this plane of illusion. Then we must find the spiritual fiber and faith to renew and even increase that desire as each attachment is faced and given up. It is a constant seeking and a constant prayer. In the end, before death, every attachment must be finished with. All desire for the things of this world must be complete.

Kalindi tells us that only those blessed to prepare for final departure ever come in contact with an Incarnation of God. Because of this contact, nothing I do comes with a price too high to pay. It has all been worth it. I have found something rare indeed. And whether or not I attain full union with God, I will go out knowing that I found The Lord in my heart and praying to never feel separate from Him again.

[1] The Bodhi Tree is a large, very old sacred fig tree under which Siddhartha achieved Enlightenment, or ‘Bodhi,’ after which he became known as Gautama Buddha.