Seeing Through the ‘Solid’ World of Illusion

British author David Icke is known for his revolutionary theory on the nature of reality that exposes the dreamworld we believe to be ‘real’ as illusory. In his book Infinite Love is the Only Truth, Everything Else is Illusion (2005),  he describes an ayahuasca experience he had while in Brazil about ten years ago during which he heard a female voice speaking to him for about five hours. What ‘the voice’ said caused the ‘veil’ of illusion to lift for him that night: 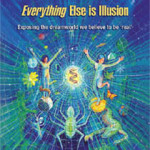 The existence of one Infinite Consciousness is the only truth; everything else is the imagination of that Consciousness – illusion.   . . . Love in the context of Infinite Love is the balance of all.  Infinite ‘Love’ is also Infinite Intelligence, Infinite Knowing, Infinite Everything.

In other words, “the imagination of Oneness created an illusory realm, one of infinite such ‘worlds’ within Infinite Possibility. This ‘world’ began to forget it was Oneness, like a dream forgetting it was the dreamer. With this amnesia came the phenomenon we call fear, an expression of All Possibility that cannot manifest within the balance of Oneness. Fear only comes with the illusion of division and separation when consciousness perceives itself as a part and not the whole. Fear is the shadow of illusory disconnection (pp. 43-44).

My Own Journey with Ayahuasca (Vine of the Dead)

When I read about Icke’s experience, I was reminded of a journey I took while I was in graduate school with a shamanic healer who routinely used ayahuasca mixed with Psilocybin mushrooms to help others see through the ‘solid’ world of illusion.* During this journey, I looked in the mirror and saw a breathtakingly beautiful owl staring back at me. I spread my wings to test whether or not this vision was real. With every movement I made, my reflection remained as that of the owl making these gestures. I could say that the ‘veil of illusion’ parted for me that night, just as it had for Icke during his experience with ayahuasca. For me, the drugs opened a door into so-called reality that seemed no less real than the one I live in day-to-day.

I came away from that experience recognizing that I had stumbled upon a fundamental truth about the nature of reality: our perception of everything in the material realm is tainted with illusion. It took my stepping out of illusory consciousness (albeit while I was under the influence of these powerful hallucinogens) to see that I could never go back to my old way of thinking. What I had considered ‘real’ before was just one perception within the Infinite Knowing Icke describes in his book.

What I have realized after many years of meditation is that God, or Infinite Love, is the only truth, the only reality.

*Note: I do not advocate taking any drug to induce hallucinations, testing out what is ‘real’ and what is not. The truth is discoverable through meditation which is much safer but just as powerful, if not more so, because of its lasting nature.