By Karen Tenney on March 6, 2013 in Tattoos/Body Image

This photo shows the torso of a woman who had a double mastectomy covered with an elaborate tattoo. It is currently posted on the page for Custom Tattoo Design. Although the image went viral, Facebook keeps removing it because they claim that it is a violation of internet nudity laws. Many people including myself see this tattoo in a very different light. To me, it is beautiful art helping one of the millions of women who have mastectomies maintain a favorable body image.

Although I wouldn’t go for such a large, detailed tattoo as this, it gave me hope to see that such beautiful post-mastectomy tattoos exist and that I’ll have a choice when it comes to covering my scars from this procedure several months from now.

Below are several other designs I really like from Baxter’s Tattoo Blog. 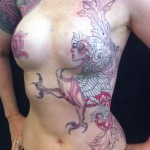 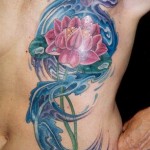 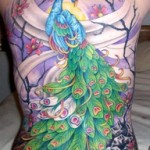 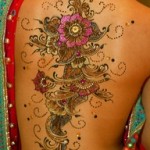 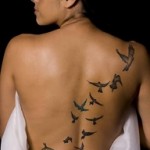 Vinnie Myers is one of the most famous nipple tattoo artists in the country. Having been a tattoo artist for over 22 years, Vinnie now spends most of his time creating nipple areola tattoos on “breast-cancer warriors,” (as he calls post-mastectomy victims) trying his best to get them to look the way his clients want theirs to look. He has two tattoo studios, one in Maryland and one in New Orleans.

Vinnie no longer does traditional tattooing. Instead he does, on average, three nipple tattoos per day. His portfolio can be found on Vinnie’s website.

A Bonus Is Waiting for You

I’ll give you a free eBook of A Mad Desire for God for sending me a tattoo style I decide to use. I look forward to seeing your favorites!

Note:  The eBook of A Mad Desire for God is now available for purchase through my website. The eBook version is available for Kindles, Nooks and iPads and can be ordered simply by clicking on the link https://amaddesireforgod.com and choosing “ORDER NOW.”

A Sudden Turn of Events
After A Double Mastectomy