By Karen Tenney on May 24, 2013 in Inspirational Quotes, Spiritual Masters – Teachings

Jiddu Krishnamurti (May 1895 – February 17, 1986) was an Indian speaker and writer on philosophical and spiritual subjects. In his early life he was groomed to be the new World Teacher but later rejected this mantle and disbanded the organisation behind it [the Order of the Star]. . . .
He claimed allegiance to no nationality, caste, religion, or philosophy, and spent . . . his life traveling the world, speaking to large and small groups and individuals. He authored many books, among them The First and Last Freedom, The Only Revolution, and Krishnamurti’s Notebook. (Wikipedia) 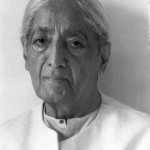